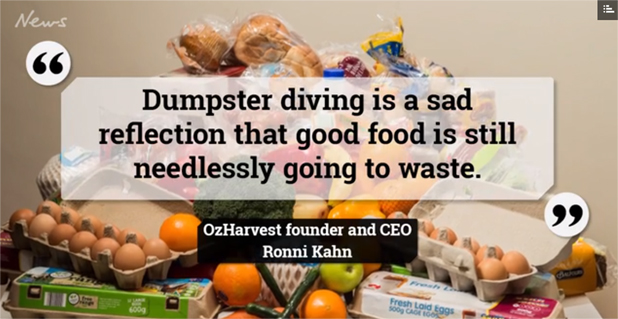 A FUTURISTIC and largely experimental trend is taking hold in the retail sector, giving shoppers a brave new way to grab their groceries.

Some of the world’s largest retailers are adopting sophisticated hi-tech tracking and monitoring systems that spell the death of the checkout, and industry insiders think it will soon become the norm.

Roger Simpson is the author of The Ultimate Retail Sales Experience and works as a consultant to help retailers improve the service levels of their stores and thinks if Aussie retailers can get the technology right, then “it’s going to be a massive game-changer”.

There are a number of emerging in-store systems that allow customers to scan their items into a digital basket as they pick them off the shelves, or have the products automatically registered via camera and sensor technology, in order to eliminate the need to queue at a checkout at the end of the shopping experience.

“Probably not in the short term because it’s such new technology, but I think it will take off because it suits a lot of customers because they just want to get in and get out quickly,” Mr Simpson said.

“Supermarkets are easy because you know what you’re going in there for and you don’t need any assistance.”

In Australia, Woolworths is the first to tentatively embrace such technology, allowing shoppers at its supermarket in the Sydney harbourside suburb of Double Bay to trial its new “scan and go” system.

After downloading a special app to their phones, customers can simply scan items they collect and pay by tapping out at a designated pay station before they leave. No need to queue, or scan all the items at a self-serve checkout in one go.

Special weighing scales for fruit and veg will display a barcode which can also be scanned as you grab them and then feed the correct price into the app. 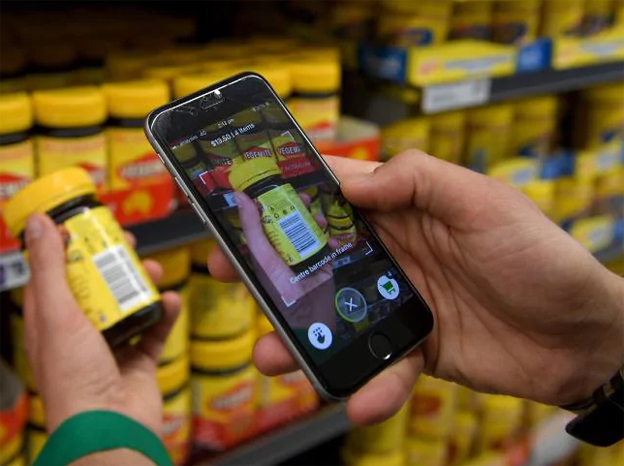 In Australia, nearly 90 per cent of shopping is still done in brick and mortar stores compared to online shopping and many large retailers are looking for ways to improve the experience for customers.

The Woolworths trial is a less sophisticated version of a shop recently rolled out in the US by e-commerce giant Amazon. It was the first to create a cashier-less store, opening its first Amazon Go shopfront in Seattle in January last year, after more than a year in beta testing. This month the company – founded by Jeff Bezos who is now the world’s richest man – confirmed another store will be opening in New York.

“Amazon Go started its first trial about 18 months ago and it hasn’t spread rapidly yet, so I think they’re till grappling with the technology,” Mr Simpson said. “It’s very hi-tech.”

But competitors in the US are following suit and similar stores are popping up in other countries.

Chinese e-retail giant Alibaba also has a network of supermarkets called Hema where customers can scan their shopping and have it delivered to their homes within 30 minutes.

“It’s a slow one to get the technology right and then I can see it taking off,” Mr Simpson said.

He points to a quote he hears used by those in the industry that is fast becoming a self-evident truth: “Any sales assistant that doesn’t offer any value to the customer will be replaced by a machine.” 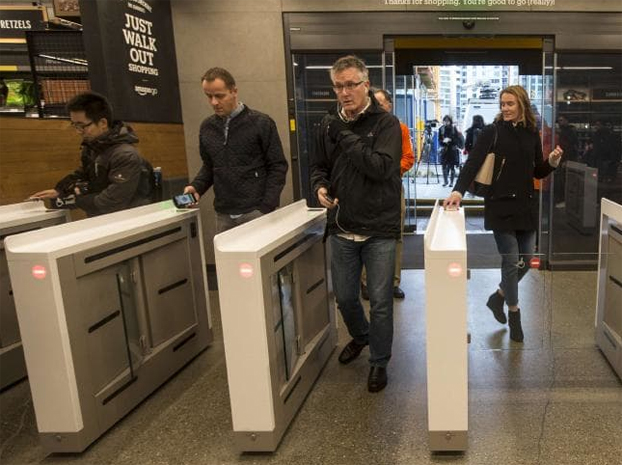 Woolworth’s head of payments Paul Monnington said the trial at its Sydney store was about understanding how Aussie consumers will interact with such new systems.

“This trial is not only about testing new technology, it’s also about seeing how our customers and teams respond to a completely new style of shopping,” he told news.com.au last week.

Eventually, it could also help supermarkets mitigate the threat of theft by customers misusing the self-serve checkout.

With the Woolies app scanning system, it would be more difficult to intentionally scan things through as the wrong item.

“As these systems get more sophisticated, the technology is going to improve to prevent these things,” Mr Simpson said.

“This is where Amazon Go has really stepped up. My understanding is that as you go into the store, as soon as you pick up a product, because they’ve got sensors and cameras set up, it’s immediately put on your account. If you put it back again then it gets reversed off.”

“It potentially reduces shoplifting to zero,” he said.

However Woolies doesn’t have the same level of technology, so for now it remains a threat that customers could abuse the new style of shopping by not scanning all their items properly.

“There has to be some way that they’ve worked on to make sure people can’t fudge the system,” Mr Simpson said.

Woolworths says depending on the results of the trial, it will “assess future options” such as a wider rollout.

While Mr Simpson noted that Aldi still don’t have self checkout services in its stores, he expects Coles and other supermarkets to follow with similar tech initiatives if the Woolworths scan and go system spreads to other stores.

“If you’re the last adopter, you can get left behind,” he said. 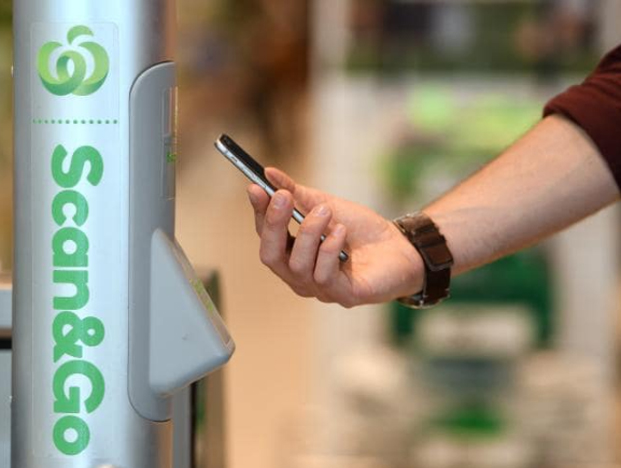 At the end of a shop, users simply tap off at the Scan & Go terminal. Picture: Dan Himbrechts Source: AAP