Why leaders need to lead with “We” instead of “I” 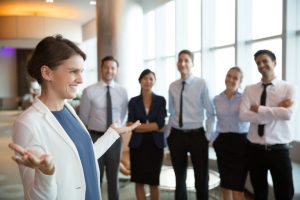 I believe that being a great leader is very challenging, not only do you have to be focussed on your own performance, but also the performance of others. It is even more challenging in today’s Covid 19 world of team separation, anxiety and recent store closures and the resulting layoffs.

Leaders can’t have a bad day, even a bad moment, as this sends the wrong message to the team and morale can quickly drop. You have to be consistent as a leader, as well as inspiring, visionary, quick thinking and many other key skills as well.

Leadership is about getting the team on board and wanting to follow you into battle. It’s about getting everyone moving in the same direction, everyone feeling part of the team and sharing the credit with your team for their success. Too many times I hear leaders using “I” statements when things are going well and not so much when things aren’t!!

Marketing guru Seth Godin, quoted a while ago, said simply switching from “I” to “we” is one of the most profound ways a business leader can improve their way their company interacts with its customers and partners. He went onto say “Instead of saying ‘I’ when you’re ready to take credit, try ‘we’,” and “Instead of saying ‘we’ when you’re avoiding responsibility, try ‘I’.”

Interesting how a simple change of a pronoun can have a massive impact. This is certainly backed up by researcher Jim Collins in his exceptional book Good to Great (a book that all leaders should read). He found that the difference between top performing and lower performing CEO’s was their use of the same words – “I” and “we”. The lower performing CEO’s used “I” many more times than the word “we” and the reverse was found with top performing leaders.

Who would have thought that words make a difference, particularly these small ones! If you are a leader, or an aspiring one, I would recommend checking your language next time you are talking with your team. Are you an “I” leader who looks out of the window to criticise or are you on the right track with your use of “we”!